The Chemistry of Food and Cooking 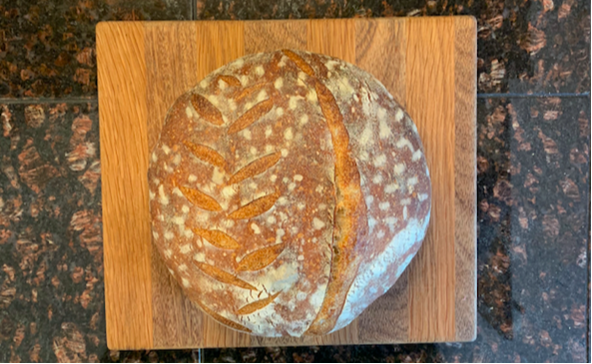 I changed the type of flour in my experiment which then produces different types and amounts of yeast and lactic acid which added to the flavor of the bread. When the flour is fermented the yeasts and lactic acid start to eat the sugars in the flour and produce CO2 and the sour flavor. Depending on the type of flour the yeasts eat different sugars and creates different flavors.
The flavor and density changed between loaf to loaf based on the flour that was used to make the starter. If the starter had more yeast and less lactic acid it would be fluffier but would have less sour flavor. The loaf of bread that I was looking for was a loaf the was fluffy along with good sourdough flavors and I found that with the ⅓ ⅓ ⅓ mixture of rye flour, whole wheat flour and bread flour.

I think cooking is a form of science even if you don't know what science you are doing, every time you boil a pot of water and cook past you are making science happen. Every-time a cook changes a receipt they are fixing a problem and then making hypothesis about what will happen and then experiment with it. Cooking goes hand in hand with science but in my project I approached my experiment with exact procedures and did the same thing every time even if the dough needed more water I would only add the amount that I did in the other bread. This is good science but not good cooking/ baking.
When making food you always have to be seeing how the food is performing and react accordingly. A chef bakes and creates constantly making sure everything feels right and is going well even if that means adding more flour to something that was added a different time. A scientist need to do the exact same thing to make sure the constants stay the same even if they know it wont turn out right.